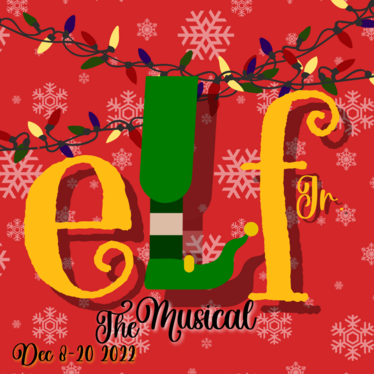 Rehearsals will be held Monday, Tuesday, Wednesday, Thursday, and Friday, between 4-7 PM, at the UAA Fine Arts Building. Actors will most likely not be called every day, just when we work on scenes that involve their character. As we get closer to our show dates, the frequency of actors being called will most likely increase, as we do full runs of the show. Once Tech week starts, rehearsals will go from 4-8.

1-2 of the pre-selected 16 bar cuts of songs from the show. You will also be asked to read scenes from the show with your audition group, and participate in a group dance call.

Once you arrive, you’ll be asked to fill out an audition form online if you haven’t already. Link for the audition forms is available here.

Please arrive at least five minutes before your scheduled audition slot so we have as much time with you as possible!

​BUDDY – A human who’s been raised at the North Pole since infancy. He thinks he’s an elf like most of the residents, but soon learns he’s a human.
​SANTA CLAUS – Santa tries to maintain his image as “Jolly St. Nick,” a man who manages to travel the world and distribute millions of toys every Christmas. Unfortunately, he’s also upset about the Elves’ work ethic and humans’ declining Christmas spirit.

WALTER HOBBS – Buddy’s biological father, he’s also dad to Michael and husband to Emily. He is job- obsessed to the point of ignoring his family.

EMILY HOBBS – Walter’s wife and Michael’s mother; Emily tries to keep her family going through Walter’s job stresses
Michael Hobbs – 12-year-old son of Walter and Emily, he is very smart. Michael enthusiastically welcomes Buddy to his family.
JOVIE – A young woman working as a Santa’s Helper in Macy’s department store, she’s not quite elf-like, but Buddy falls in love with her anyway.
ELVES #1 - #5 – Employees in Santa’s workshop.
CHARLIE – the foreman/boss of Santa’s Toy Workshop
SHAWANDA – a responsible elf who has to pick up Buddy’s slack when he can’t work fast enough.

FAKE SANTA – This is the Macy’s-employed Santa who does not quite live up to the real thing.

​
Buddy, a young orphan, mistakenly crawls into Santa's bag of gifts and is transported to the North Pole. The would-be elf is raised, unaware that he is actually a human, until his enormous size and poor toy-making abilities cause him to face the truth. With Santa's permission, Buddy embarks on a journey to New York City to find his birth father and discover his true identity. Faced with the harsh reality that his father is on the naughty list and that his half-brother doesn't even believe in Santa, Buddy is determined to win over his new family and help New York remember the true meaning of Christmas.

Breathe, you got this! We want you to do well. Nerves are totally okay, we get it!
​

​Auditions for Elf Jr. The Musical - Book by Bob Martin and Thomas Meehan, Music by Matthew Sklar, and Lyrics by Chad Beguelin.

Due to the number of performances, there will be 4 "understudy performances" during the run, to breaks to the leads and opportunity for the hardworking understudies. These will be planned well in advance so families can make appropriate arrangements.

**Students will need to speak with their teachers about missing a half-day of school on show days. This hasn’t been a problem in the past, and teachers are typically really supportive!

CASTING NOTES:
Names and Gender Identity–The characters mostly take their names and gender identity from the original cast. We can adjust some names and genders to your preference of name and identity.​