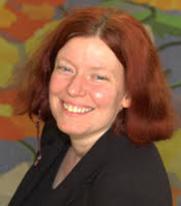 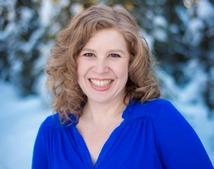 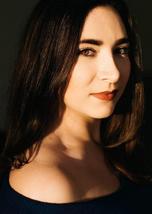 Originally from Greencastle PA, Katie's road to Alaska has been an adventure! She is a graduate of Shenandoah University and Conservatory (Winchester VA) where she received a BFA in Musical Theatre and Voice Certificate. After college she took to the road on the National Tours of Show Boat and My Fair Lady. Katie has performed with numerous regional theatre and summer stock companies across the United States. Katie first came to AK in 2004 to work at the Cabin Nite Dinner Theatre in Denali Nat’l Park and fell in love with the “Last Frontier”! Locally, she has performed with Perseverance Theatre in A Christmas Carol as Mrs. Fezziwig, Cyrano’s Playhouse (It’s A Wonderful Life the Radio Show , Carnival, The Boyfriend ) and originated the role of Eudora Horn in the National Premier of Gold Rush Girls.  She has also worn the director's cap for productions of A Wrinkle in Time and Alaska: The First 100 Years (1955-1965)
Katie has performed in numerous productions with Anchorage Opera (Rigoletto, HMS Pinafore, Barber of Seville) and has served as the music director for the children's chorus of Carmen and La Boheme.  She is also a member of AO's Overture Council and serves as the head of it's Education Committee.  Katie can be seen performing with some of Anchorage's top jazz/blues musicians with her group Ginger & Ale.
For 9 years Katie was the music/drama specialist at Pacific Northern Academy instilling passion and self confidence through theatre into every student! She now works full time as a voice instructor and often works with Alaska Theatre of Youth as a music director for their summer conservatories and season productions.  She is very proud to be an educator and performer!

If you are interested in private lessons with Katie you can find more info here!

The ATY people that make it all happen!

Stephanie Collins is a graduate from the University of Alaska, Anchorage. Her Bachelors in Theatre focused on choreography and dance as well as Wardrobe. She grew up as a competitive gymnast and was cast in her first production in high school. Stephanie loves performing but her passion comes from educating the youth on all skills theatre from acting to stage management and costume design. Her credits include choreographing Working: the Musical, Wardrobe Supervising Anything Goes and Bring It On: the Musical, and working with ATY on numerous productions.

Stephanie would like to thank her parents for all their support and her college theatre professors for showing her that she can achieve anything and her wonderful husband for always supporting her dreams.

Janet has appeared on or backstage with almost every theatre company in Anchorage. She is the resident stage manager for The Anchorage Civic Orchestra. When not on stage, Janet skates as part of the Derby Intelligence Compliance Squad  with the Rage City Rollergirls as Buster Good. She’d like to thank her husband Mark and Diet Coke for making all things possible.

Jodi has been a part of the Anchorage theater scene since 1996. She graduated from the University of Alaska with a bachelor's degree in Theater and Dance with a Minor in Music. She has worked with local companies ranging from the Opera to Mad Myrnas and most of the sketch comedy troupes that came in between. Jodi has directed several ATY productions since 2017 and is very excited to continue into the future with ATY. Jodi loves all areas of theater but her passions are musical theater, puppets, magic, dance, and stage combat!

Kat Altman is the new Executive Director for Alaska Theatre of Youth as of January 2022. She recently moved to Alaska from Atlanta, and immediately jumped into a teaching role at the theater. Her background is as a professional stage and film actor, working under names such as James Franco in Streetcar Named Desire, and Jake Kasden in Jumanji. She is on the board for an Atlanta-favorite theater company, Shakespeare on Draught, and has been directing, music directing, and acting with them for years. She also found the time to work as a music teacher for going on seven years, as well as directing children's shows around town. As a graduate from California Institute of the Arts, she believes in the power that theater can have on young people, in their ability to empathize with others and in their own self expression. Her cat Riley and her partner Will are her favorite beings, and she loves them very much.
​ 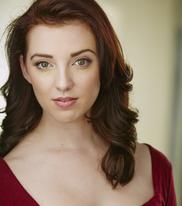